I get tired of the poop in my everyday city life. Our most used bathroom (with litter box) is a half bath just off the kitchen. If the door was closed, you might think it was a pantry. Cleaning the litter boxes is never an exciting chore. And Matilda has been smearing extra rude turds about the house while adjusting to a dietary change. Then there are the mouse droppings in the kitchen which have been particularly infuriating, though cayenne pepper has really helped with that problem. There’s not that much poop to deal with here, but it’s too much.

Yesterday, I went to Wintervale Ranch, which is about a 50-minute drive from home. That’s Elysa’s parents’ place. At Wintervale, there are four horses, three chickens, a cat, a dog, some wildlife passing through, and a healthy community of several types of trees. I guess there are some nice native grasses there too, but I haven’t gotten very excited about them yet. While walking the trails and checking in on the various critters, I came across a pile of turds that I apparently found interesting enough to snap a photo. 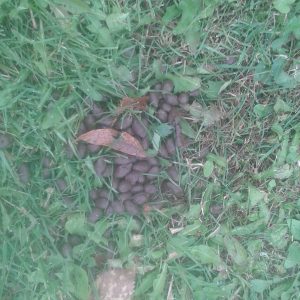 Someone suggested they might be rabbit poop, but it seemed a little too large for that. My best guess is that it was deer poop. But I think the most important thing for me to take away from that situation was that I found the poop interesting enough to warrant kneeling on the ground, inspecting it, and photographing it. And now I’m writing about it. Examining turds is a good way to learn about who has been dropping by. 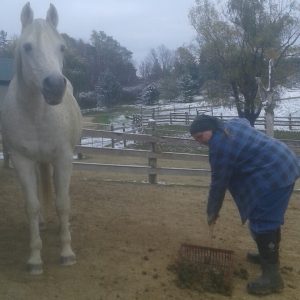 Horse poop is the best though. It doesn’t usually smell bad, and it helps us grow impressive crops. We took home a good load of composted horse manure. As a gesture of appreciation for the compost, I gladly scooped up the small amount of poop that was lying around in the paddock. John gave me a great compost management tutorial while he helped me empty the crap cart. Horses produce an impressive amount of poop, so manure management is a big job, even with a small number of animals.

Learning about how much time is spent working with poop on a farm has brought me back to an experience I had in middle school that finally makes sense to me. I attended an extremely conservative Christian school. During the winter, we got to go ice skating sometimes, in the flooded field on the other side of the parking lot. One time, Mrs. B slipped and fell on her butt, and shouted, “Shit!” We all looked at her with shock and disbelief. She defended herself, saying, “What? I grew up on a farm.” I always thought that was a ridiculous excuse, but it finally makes sense. Rural poop is different from city poop, and when you spend so much time moving poop around, you need more than one word for it.

Yesterday morning, when I woke up and came down the stairs, I found that our dormant thermostat read 58°F. I decided it was time to get the heating system ready for winter. We have hot water baseboard heating, so I wanted to flush out the system, refill it, and bleed the line. I had very little energy yesterday, so I didn’t start working on the heat until late in the evening.

I got a bucket ready and drained the system. Then I opened the series of valves to refill it with clean water. I watched the pressure gauge for a little while and the needle didn’t move. I opened the drain valve to see how fast the water was flowing from the fill line. It seemed like a pretty puny stream, so I thought maybe there wasn’t enough water pressure to fill the boiler.

We had trouble getting the system to fill a couple years ago, so we called out a plumber. He located a filter that was full of crud. I think that house call cost about $100. Eager for a chance to fix something we’d had to pay for last time, I opened the pipes and located the filter. It looked too clean to be the culprit, but I pulled it out for a better look anyway. 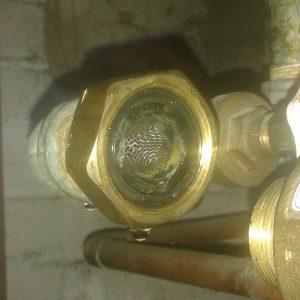 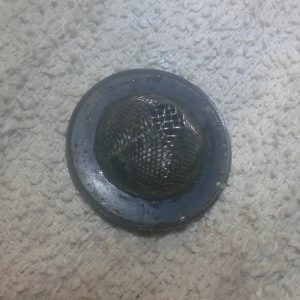 The filter was definitely not the problem. Next, I checked the backflow preventer. That wasn’t it either. Since water was definitely flowing through the system, I decided to try filling it again. This time I waited longer for the needle to move on the pressure gauge. I stood there and visualized the whole system filling up with water before the pressure could increase.

When the needle started to move, I had a good laugh. As it turned out, the only part of the system with a problem was the valve operator’s patience. Now that I think about it, I’m not even sure my original hypothesis would have been possible. Nonetheless, I’m glad I ran with it, since I learned more about the components of my home’s heating system. It was a rather stressful experience though, so I hope I remember all of this next time.

K: What did you learn in school today?

A: Biology was fun. I learned about classifying organisms.

K: Don’t talk like that at the dinner table. You’re going to make us lose our appetites.

Gardening season is drawing to a close. I finished tearing down my tomato plants yesterday. Well, all of them except the volunteers: I still have five or six potted plants, plus the sideways one or two growing in the ground by the raised bed, and the one growing by the compost pile. But none of those count since I didn’t plant them; they volunteered to grow where some of last year’s tomatoes had fallen. They’re all in my back yard, so they are a low priority for cleanup.

I finished cleaning up the tomato plants at my MGS (Midway Green Spirit Community Garden) plot last Thursday. I think I had eight plants there: two heirlooms and six hybrids. A lot of them ended up growing across the ground because I didn’t have the equipment to support my giant plants. That plot is maybe half cleaned up now. I still have some pepper plants to cut down before it snows. And the seed pods on my broccoli are probably ready to come inside to dry. My other brassicas have mostly fizzled out due to damage from slugs.

My Edmund Ave. plot is almost empty now. Just two kale plants are left there. I cut down the basil and pulled up the green beans a couple weeks ago. I froze more than a pint of pesto. Yesterday, Elysa and I tore down what remained of our six giant heirloom tomato plants. The Blondkopfchen was a particularly impressive plant. Planted in the center of a ten-foot row, its branches had reached both ends of the row and started to loop back in. We got at least a few thousand sweet yellow cherry tomatoes from that plant. I think I want to give next year’s Blondkopfchen plant the full 10′ x 10′ plot and see what kind of magic we can work together.

I stopped weighing this year’s tomato harvests after I hit about 65 pounds. I’m nearly certain we got more than 100 pounds total. We froze some. We canned some. We shared some. We ate some fresh. We made tomato sauce, tomato paste, tomato salsa, tomato jelly, tomato ketchup. Now it’s time to start thinking about how I can use my time this winter to prepare for next year’s bounty.