Whenever I take the train, I bring a painting respirator with me. It’s the only place I wait around outside under “no smoking” signs, so I know I’m almost guaranteed to have people blowing cigarette smoke in my face. Tobacco smoke makes me sick, and dust masks don’t keep it out. When I wear a breathing mask, some people blow smoke in my face intentionally. When that happens, a dust mask will actually trap the cigarette smoke in and make things much worse. I love how my painting respirator protects me from tobacco smoke, even if people are blowing it right in my face. 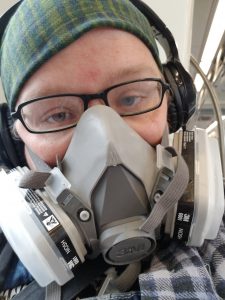 A few weeks ago, I got off a train where a group of people was hanging out on the platform next to an overturned shopping cart that was really in the way. One guy in the group was intentionally obstructing the flow of people getting off the train while blowing smoke into as many people’s faces as he could while we squeezed past him. I walked by with my painting respirator on, and he looked me in the eye and said, “Fuck you, white bitch.” He was obviously looking for a conflict, and kind of a turd. I wasn’t surprised, but I have some major problems with what he said.

I am comfortable with people resenting me for being white, but there was a lot more than that going on. He singled me out from the other white people because my body’s needs are different from the average human body’s needs. That’s ableist. Also, he used a misogynist insult, which triggers my gender dysphoria. But what upsets me the most is the context in which he called me a bitch. I prevented him from putting something into my body that I didn’t want there, and he responded by calling me a bitch. He was obviously an asshole, so it makes sense that his words had rape culture in them. But plenty of less objectionable people have said the same thing in similar circumstances, which is a bad pattern.

I think a lot about how white I am when I wear a painting respirator to take the train. Lots of people stare, but the worst thing I seriously worry about is having an angry smoker burn me on purpose. In the grand scheme of things, that isn’t very scary. Cigarette cherries burn at a low enough temperature that it takes at least a couple seconds of sustained contact to cause any significant injury.

If I were a POC, though, I would be seriously worried about getting murdered by police for having a health problem and taking public transportation. People might think I was a terrorist, so I probably wouldn’t wear the painting respirator at all and would simply tolerate my illness and be discreet when I have to puke. POCs who have health problems like mine don’t have the same freedom to protect their bodies as I do.

Wearing a painting respirator to ride the train is a really white thing to do. Not because I’ve seen other white people do it, but because if I wasn’t white, I’d get harassed by white people for doing it. And that would almost certainly lead to police involvement which is inherently dangerous. I wish more smokers would consider who they might be hurting that can’t safely do anything about it.

View all posts by AndeQ